Interestingly, my oldest daughter did check in on me during the week. She texted me the next morning and many of the same statements came up. I had been telling her I was in a bad way, worse than ever before. She’d offer to come over, but I didn’t want company; I was afraid I’d get angry at her, too. I often texted her when I wanted someone to pray for me. She knew that I wasn’t asking for advice or for her to cheer me up; I just needed a safe person to tell that I was suffering. This particular week, I could not pray myself! Her prayers for me were going to be the only ones being offered this week (although I later learned my husband was praying like crazy). Anyway, I knew she’d pray and beg God to give me peace and relieve my suffering. But this particular week, the tone of my texts as I reread them today, are haunting. Can you pick up on the cues of a suicidal woman? Can you sense the strange sense of peace and resignation that I was coming to a point where I was done with life, and was ready to just go to heaven and be done with it all?

Christine: “How r u feeling today? Or is it too early to know?”

Me: “Pretty discouraged to the point of despair regarding what I have to go thru and how it affects everything in my life, including my relationships. I’m just plain unhappy! I’m weary of this whole thing! I don’t see how anything good can come from it. I’m tired of surrender! I feel disconnected from daddy, God and everyone in between! I’ve lost hope. I feel this whole attempt to be made whole or to make whole what is broken in my life is hopeless. And I don’t think this is depression speaking. I just reflect on my life today and the joy or contentment I once knew, and the results or consequences are more than I can bear in my spirit…I think the sadness may be subsiding but now I’m just plain worn out, discouraged, despairing and I think even resentful of this situation. I am so tired of this! I am really struggling with accepting this roller coaster life – tired of this life that I’ve been asked to live! It is miserable! I’m pretty sure I’m losing the battle.”

Christine: “I just don’t get it, either, mommy. The only thing that makes sense is that there are sooo many other people out there going through the same thing I think …only with less of a foundation under their feet than what you guys have. There just has to be reasons still yet unseen as to why God has allowed this…Your life is not over yet. There could still be a lot of future for you guys. Maybe, there is still lots of purpose to come out of this.”

Christine: “Ya, I know. Well, while you are worn out and done with all of this… I’ll keep believing for you…Because I just can’t believe God is done with you.”

Me: “Yesterday when I walked, I tried to listen to the music that reminds me of God’s purpose, grace and mercy and it was just a bitter pill! I had to turn it off because the words offended me! I have to admit, I am far from God right now and I am bitter about this! I’m fed up! My longing for God has been silenced! And the same way I push daddy away like a hurt, cornered, rabid dog, I find myself this week pushing God away, too! I’m just telling you where I’m at today honestly! I cannot do this anymore!!!!!!!!!!!!!”

Christine: “I just can’t accept it’s been a waste. I mean other pastors or ministry workers have fallen away from the Lord or they’ve slipped into adultery or something like that…that’s not you guys. You were doing what God called you to and have not strayed. Yes, I know today…this week…this season…you may not feel that. I know you are feeling embittered. I can understand. But it’s just a season. I know it. You guys are soooo Job!!!! You were serving the Lord and He allowed you to endure something terrible. Why? I don’t know. But it’s not the end of the story. ‘He who began a good work in you will perfect it until the day of Christ Jesus.’ It’s ok if you can’t believe it right now, mommy. I’ll keep praying it for you.”

Me: “Scripture says that the enemy seeks to tear down and destroy! I give up! He’s won; this depression has torn down and destroyed everything in my life I hold dear! Over and over again! I am worn out! Then I read that ‘When I’m weak, He is strong?’ Who’s kidding who? God is not strong today. I am weak and He is absent…”

Christine: “Maybe you don’t feel it today…But I just don’t believe it…It’s not the end. You are sick at home. I know I just keep sounding like I’m trying to convince you or preach to you. You know I’m not trying to do that. I see where you are. And I’m letting you ask “why” …But while you are in the pit, I’m still praying. I’ll help hold up your hands. Close your eyes and rest while I hold your arms up.”

Me: “Well, when a mind like mine is sick, I can see how it is better to lock us away. Because whatever a mind thinks, the heart follows. A when the heart sludges thru this mud for days on end, the heart follows. That’s where I’m at. I think my brain is no longer being tormented. I’m just done fighting it.”

Christine: “Maybe. I can see that. And after a longer struggle, the recovery process will be longer, too. But I still don’t believe it’s over.”

Me: “There is a point in mountain climbing when the journey just becomes too difficult. Once you’ve lost your toes and fingers to the cold, you’ve run out of food and supplies, there comes a time to just give up and turn back. I’ve reached that point; there is no point in battling on. I’m turning back. I’m out of steam; I’m out of courage; I’m out of reserve to hold on to; I’m worn out!”

Me: “I appreciate your hope, confidence and prayer. I am glad someone is interceding for me. I just no longer have anything left in me to do that for myself. I’m the one who has to live in this tormented mind. What possible good can come from a mind who is scourged to the point of being embittered toward life, husband and God! What good? My mind pushes me away from all these!!!!!!!

Christine: “I wish I had the answer, Mommy…” (end of conversation)

First, did you sense the times I was trying to help her understand that I was throwing in the towel and why? She didn’t know I was really suicidal, but she wouldn’t relent and let me give up. I also want to draw your attention to something: she never rebuked me. She didn’t tell me how unspiritual I was acting. She didn’t express disappointment in me! Her love, mercy and grace just kept coming at me one shot after another. Why didn’t she just let me give up, already? She was not intimidated. She didn’t walk away flabbergasted! She stuck it out through everything I was vomiting up! Finally, she had confidence in our God when I had lost mine! You can bet she was a vicious, prayer warrior that week and took her job seriously, and I’ll tell you why I knew this in a minute.

What Did She Mean About Holding Up My Arms?

Exodus 17:8–13 (NASB): “Then Amalek came and fought against Israel at Rephidim. So, Moses said to Joshua, ‘Choose men for us and go out, fight against Amalek. Tomorrow, I will station myself on the top of the hill with the staff of God in my hand.’ Joshua did as Moses told him, and fought against Amalek; and Moses, Aaron, and Hur went up to the top of the hill. So, it came about when Moses held his hand up, that Israel prevailed, and when he let his hand down, Amalek prevailed. But Moses’ hands were heavy. Then they took a stone and put it under him, and he sat on it; and Aaron and Hur supported his hands, one on one side and one on the other. Thus, his hands were steady until the sun set. So, Joshua overwhelmed Amalek and his people with the edge of the sword.” 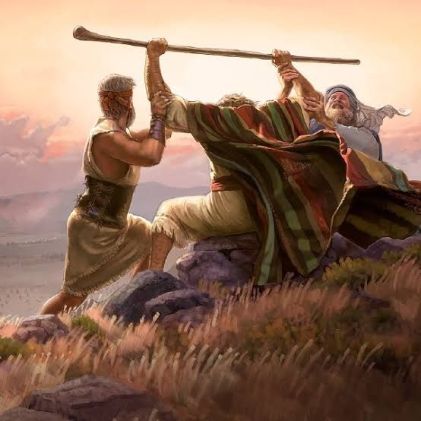 In short, when Moses became weary and his arms began to fall from fatigue, the enemy they were fighting would start to overpower them. But, when Moses arms were up with the staff of God in his hand, Joshua’s army would begin to overpower their enemy. So, Aaron and Hur, realizing that Moses was incapable of doing it himself, stationed themselves, one on each side, and physically held up Moses’ weary arms for him. At the end of that day, Joshua overwhelmed the enemy and killed them. Here’s the principle: There are times when people become so fatigued that though they desire to do what God is asking them to, they just can’t. In those times, God calls along Aarons and Hurs to help them do what God desires, but they carry the full weight of it themselves. I knew this biblical story well. I knew what she was telling me.

She said, “I will believe for you. I will intercede for you” (not just about me, but as a replacement for me). She was saying, “I trust God! I will trust God FOR you!” She didn’t offer any ridiculous advice to try to talk me out of what I was saying! She let me vent! The vomit kept coming. The only thing she wanted me to remember was to trust in God’s eternal purposes. She simply offered love, grace, mercy and support. Incredibly, she refused to be dissuaded to become discouraged herself! She believed when I couldn’t!

Well, I had a doctor’s appointment that day, so that was the end of the conversation. But later that day, I returned home from my doctor’s appointment and discovered that Christine had brought me a single red rose in a lovely little vase, beautifully wrapped up by a florist. Attached to it was a card which simply said, “Love, your Aaron.” Scrawled across my 6-foot bathroom mirror she had written in soap: “Love you! Both of you! Praying for you!” It was there on our mirror for months as a constant reminder. I texted my response to her in tears!!!! “Christine, Thank you!! This means the world to me!”

Just a sinner saved by grace .... View all posts by justlearningtolean