Well, the week continued, and as had been my habit for about 6 years, I went for my daily walk down my street. I turned on my playlist and felt nothing. In fact, all I really felt was anger and resentment. Sometime during that walk, I heard, “The Anchor Holds,” sung by Ray Boltz. My ears perked up as the song bemoans that the songwriter’s dreams and life had slipped right through his fingers like grains of sand. Then, the chorus promised that God, being our Anchor, was strong enough to hold onto us in the most difficult of situations.

But for some reason, what I heard was that I’d only be held by this incredible Anchor’s strength if I were strong enough to hold onto Him. When I heard that, in my despair and the rage I was experiencing, I shouted at God at the top of my lungs, “But I can’t hold onto Your Anchor anymore!!!! It’s too hard! I just can’t do it anymore!”

I continued my walk, still frustrated, but I just let my music list play through on shuffle. I was pretty ticked off having suffered so long, learning a healthier perspective about God and embracing my new Foundational Truths, and now here I was shouting at God, because I couldn’t hold onto Him anymore. (Sigh) I felt doomed and condemned! Before this episode, I had had faith that I was trying to please God and had faith and confidence in my adjusted view of God, but now I was too weak to be strong enough to hold on to the only Hope I had! I fumed all the way up and down my street! It seemed so unfair! On the last leg of my walk as I was nearing home, another song began to play. I wish I could remember the exact song that played, but truthfully, when God revealed to me the following, my mind started racing to figure it out before my walk ended. I was on the precipice of something huge and I felt it in my spirit! This could change everything! 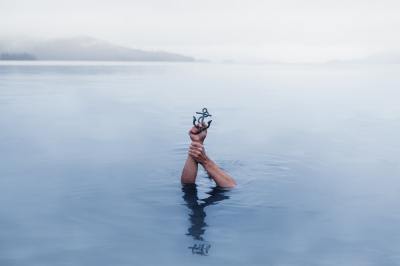 It nearly stopped me in my tracks. I began to ask myself. “What is an anchor? What does an anchor do? Do ships hold onto anchors or do anchors hold onto ships?” I thought about the strength of an anchor. I thought of its potential for rescue and safety in the storm. I rehearsed in my mind the terrible storm I was in and I remember getting angry that my Anchor appeared useless to me. I knew my Anchor, Jesus Christ, was solid, strong and powerful, but what use is an Anchor, if I was too weak to hold onto the Anchor.

That’s when the Holy Spirit broke through the silence to speak into my heart. “You don’t hold onto an anchor! The anchor holds onto you!” I began to rehearse in my mind the dynamics and physics of an anchor. Let’s see: It’s attached to the ship. The weak link for a ship is its connection to the anchor; if it isn’t a secure connection, the anchor would be useless. But if the ship is designed right, the anchor is solidly built into the frame of the ship, tethered tightly to its hull. Once it is built, the anchor holds onto the ship. The ship doesn’t hold onto the anchor. (Gasp!)

I personified the Anchor and the ship. I pictured me as the ship grasping the anchor with imagined hands and holding on for all its worth, struggling to stay afloat. I thought how silly and worthless an anchor would be if the ship had to be strong enough to hold onto the anchor. Then I pictured myself as the ship, being tossed and turned on the waves, struggling, clamoring and clawing to find this anchor; one end was solidly tethered to my insides while the other end was firmly connected to the bedrock on the ocean floor. It was not at the top, in the storm, where I was looking at all!

It occurred to me that a ship in distress out in the storms of the ocean does nothing but let the Anchor fall to the bedrock below. Then, it waits safely through the storm while the anchor holds the ship in its current location. Yes, the storms still rage above, and the boat may get tossed about above the surface, but down below the surface, the anchor is firmly planted on the rock. It may feel desperate up above, but down below where the anchor is resting, it is calm.

I was definitely in the squall of my life. I was in a terrible storm, one which I felt could pull me under. I also knew in my brain that I was still a child of God. I knew God was supposed to be my Anchor. What I hadn’t realized till that day was that I had always assumed that in order to benefit from having an Anchor, was that I had to be strong enough to hold onto it through life’s most difficult storms. Me! I believed my strength would have to be strong enough to hold onto my Anchor. I asked myself, “What good would an anchor be if it’s merit came down to each person’s ability to hold onto it through a storm?”

There it was: My Anchor and the Bedrock. Nowhere did I read that I better be strong enough to hold onto God. I only read that no one and nothing can snatch me out of my Father’s hands (the Bedrock) once I have been placed into them. I knew I was in Christ, even in this dark, empty, vile wilderness and that Christ was in me. And just for a few moments, the grace of that precious truth caught me off guard. I pictured the footprints plaque. I pictured Him picking me up, while I was still kicking and screaming, and carrying me through this storm, all the while I’m shouting at Him for abandoning me. While I could do nothing to help myself survive it, I wondered if He could hold me through the violence of this storm.

My mind wandered back to the image of the anchor but this time, I visualized the ship as having arms. Imagining the first scenario, I thought about how ridiculous it would be for my figurative ship to reach down through the murky water to find the anchor sitting down on the bedrock, trying with all its might to hold onto the anchor.

Then, the image shifted as I internalized my newly discovered thoughts about anchors. This time, although my ship was still being tossed in the storm, up from the bedrock an anchor with massively strong arms reached up and wrapped his arms around the floundering ship and embraced it, holding it secure in its embrace. With the anchor firmly established onto the bedrock and with its arms encapsulating and protecting the little ship, it was safe. What did the ship do? The ship just sat there and did nothing. Yes, the storm was still pounding it, but the ship was at peace within the safety of the strong arms of the anchor, which was tethered to the hull of the ship, the “heart” of the ship.

I finished my walk with these simple thoughts. Today, I’d be content with this new realization that I didn’t have to hold onto my Anchor. I was safe in my Father’s hands. Not even in my own frustrating attempts could I wriggle free of Him. Today, I’d be content with doing nothing to hold onto the Anchor but would rest in the knowledge that if His word was true, the Anchor was still, even in this violent storm, holding onto me. 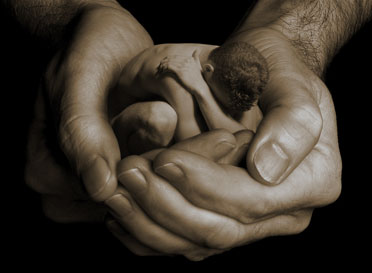 Just a sinner saved by grace .... View all posts by justlearningtolean